Why Non-Stick Cookware is a Danger in Your Kitchen

What’s the deal with non-stick cookware and bakeware?

Our kitchens are usually stocked full with everything non-stick these days: frying pans, saucepans, rice cookers, slow cookers, muffin tins, sandwich makers and waffle makers. The same family of non-stick chemicals has also found its way into dental floss, waterproof jackets and shoes, stain-resistant couches, the Apple sports watch, and ‘breathable’ clothing. I’d need a much longer post to cover all of these items for you today, so let’s look at non-stick cookware and bakeware specifically.

Non-stick cookware was popularised by Teflon Dupont in the ’70s and ’80s during the low-fat diet craze. Instead of using “unhealthy” fat to stop your sausages from sticking you were advised that it was much healthier to use cookware lined with an unpronounceable chemical called PFOA (Perfluorooctanoic acid). Of course, all was not as it seemed. Eventually, a successful class action in the USA linking cancer clusters to drinking water contaminated with PFOA meant this nasty chemical finally ceased production in the USA in 2015.

Unfortunately, we live in a world where you don’t actually need to prove a chemical is safe before putting it on the market. Hence, PFAO in non-stick cookware was simply replaced with another regrettable substance called PTFE (Polytetrafluoroethylene). But as the production of PFOA wound down in the USA, China took over the reins and is still to this day a mass producer of PFOA and its sister chemicals despite the dire health implications.

Another sister chemical called PFOS (perfluorooctane sulfonate) is used in firefighting foam at airports and military bases. But it’s also bad news. Just this past year PFOS made the headlines in Australia and the USA after it was found to have leached into water supplies from the aforementioned facilities, resulting in a ban on drinking water and more class actions.

In the USA, the Environmental Protection Agency recently started questioning the toxicity of a new generation of non-stick substances (GenX and PFBS) introduced on the basis that they were safer than the older versions. Yet again, it looks like they too are just more in a long line of regrettable non-stick substances.

Why are non-stick chemicals so harmful?

The ‘F’ in all these unpronounceable chemicals stands for Fluorine. It is the atom responsible for creating some of the slipperiest substances known to man.

Fluorinated compounds wreak havoc on the environment and our health. They have persisted in the environment for years and find their way by air and sea to many Arctic countries, including Greenland. The contaminants are still increasing in these native populations having never held a non-stick pan in their hand ever. Fluorinated compounds bioaccumulate and biomagnify up the food chain, often through marine life finding their way into traditional foods. The half-life of many of these chemicals is about four and a half years. So, even if we eradicate them today they will take years to leave our system.

The problem with such contaminants is that they are linked to kidney and testicular cancer, abnormal thyroid hormone levels, pregnancy-induced hypertension and preeclampsia, obesity and low birth weight.

They are polluting our surface water, groundwater, drinking water, rainwater and the air we breathe. They get trapped in the dust in our homes, in our carpets, and pregnant mothers offload them to the next generation. As well as pregnancy complications, they have also been linked to miscarriages. We sit on them and breathe them in as we watch TV and sleep at night as they are often part and parcel of the flame retardants slathered all over our mattresses, furniture and upholstery.

The good news is that just this year a group of UN experts tasked with deciding which chemicals should be globally banned under the Stockholm Convention decided to add some of them (PFOA and PFOS) to the list. Next year, the recommendation will hopefully be adopted making it a legal requirement for all 180 countries, including Australia, to ban these nasty chemicals.

Non-stick substances in cookware – a danger in your kitchen

According to the Environmental Working Group, a non-stick pan at 360oC gives off at least six toxic gases: two carcinogens, two global pollutants and a chemical that is known to be lethal to humans.

Even at much lower temperatures of 240oC, toxic particles have been found to be released, giving rise to flu-like symptoms.

These high cooking temperatures can be attained after just a couple of minutes of pre-heating.

Dupont (now Chemours) recommends that you remove birds from the kitchen before cooking with non-stick cookware so they don’t become seriously ill or die (check out their website if you don’t believe me!). They also advise you to avoid pre-heating their cookware at high temperatures to avoid toxic fumes.

Whilst non-stick cookware made from PFAS should be given a wide berth, there are a few other materials that you should also avoid.

Aluminium pots and pans should be avoided as aluminium is linked with Alzheimer’s disease and breast cancer. It also irritates your digestive system and disrupts your body’s ability to utilise various minerals. Aluminium foil should be avoided for the same reason. If in doubt, grab a magnet and check to see if it sticks to your cookware – if it does you’re safe, it’s not aluminium.

Copper pans should also be given a wide berth. Although copper is needed in the body, copper overload can lead to poisoning and upsets the absorption of other important minerals. A copper pan with a stainless steel interior which touches the food is OK.

Green cookware is usually ceramic-coated with stainless steel or anodised aluminium base. Whilst they are not usually toxic they don’t necessarily last as long as other alternatives so bear this in mind. Decision fatigue is also a factor, as so many green technologies exist and it can be hard to know if what you are buying is truly healthy or sustainable. I use the brand Neoflam sometimes for bakeware but if I was a serious baker I’d stick to good quality stainless steel which is best sourced online.

Alternatives for the safest cookware

Safer alternatives to non-stick cookware are stainless steel, cast iron and glass. There are a couple of qualifications though…

If you have a nickel allergy or an overload of nickel you should avoid stainless steel altogether. But really and truly it is hard to eliminate the possibility of any leaching from stainless steel as its composition can include not just nickel but also iron, chromium, molybdenum, titanium, copper and vanadium. However, if you don’t have issues with nickel then the heavy, good quality stainless steel is your best bet as it is less reactive. But if it gets damaged through scouring it’s time to replace. A safer option again is to buy a one-piece stainless steel pan that has no welds such as the one I use from Australian company Solidteknics as it reduces the risk of contamination from other metals. They do a similar one-piece in wrought iron too. 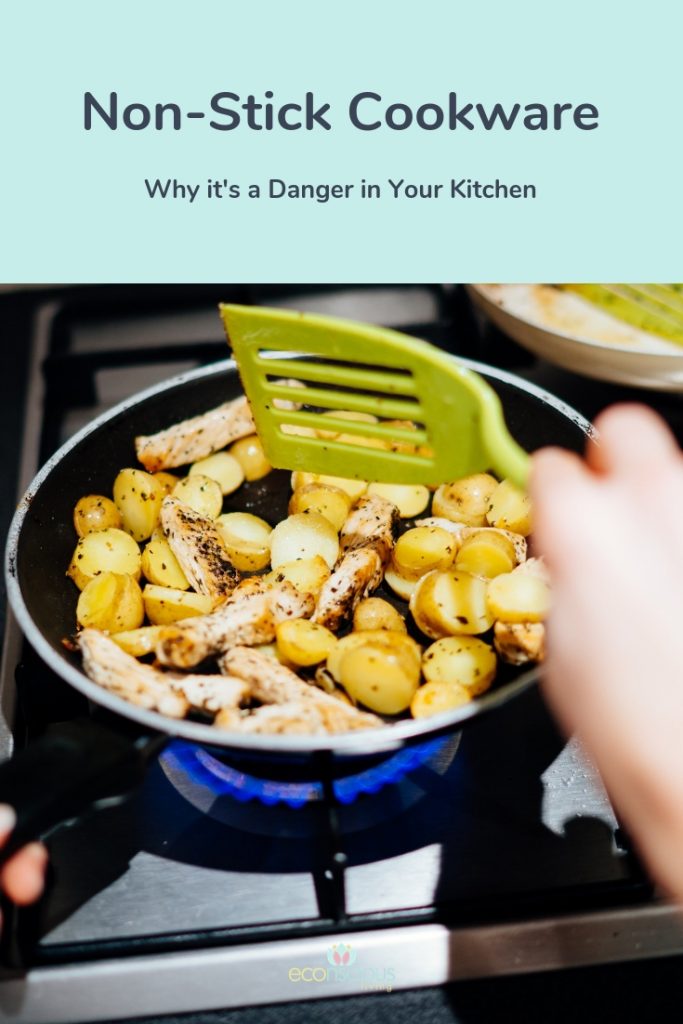 Cast iron is the most sustainable of all as it lasts lifetimes but it is also very heavy. Another downside is that iron can potentially leach from cast iron pots and pans in a form that your body can’t use. Diligent seasoning can reduce this effect but if this is your cookware of choice you need to keep an eye on your iron (ferritin) levels. An overload of iron, such as with the genetic condition haemochromatosis, can have very serious consequences for your health and is not to be messed with. Enamelled cast iron (such as Le Creuset, Staub, Chasseur) is a better option but it too has been shown to have issues with lead and cadmium contamination. See, it’s not all that straightforward!

Good quality glass including Pyrex you really can’t go wrong with but it isn’t always practical for every type of cooking.

As mentioned above, some ceramic and enamel-coated pans can also contain lead and cadmium. Check out Tamara Rubin’s website for specific brands and products tested for lead and other heavy metals. She has shown that dark red-coloured pans, a signature of these well-known brands, often indicates the presence of cadmium; a nasty heavy metal you don’t want in your body. Although tests only proved positive for the red exterior not the inside of the pans.

What should you do with your non-stick cookware?

Start by replacing those appliances made with non-stick coatings that you use most of. Plus, a few more tips:

At all costs, avoid non-stick cookware and bakeware made of fluorinated chemicals wherever you can – it is the worse of the worst. Instead, use a variety of material to cook with, ideally a combination of the following:

There are many brands of healthy cookware, such as Solidteknics, Le Creuset, La Chasseur, Emile Henry, De Buyer, xtrema, Baccarat, and Scanpan. However, you can’t just assume these brands don’t sell non-stick cookware. Some of their items may well be non-stick, so always check!

RELATED: HOW TO REDUCE LEAD EXPOSURE IN YOUR HOME

If you’d like to clear your house of unwanted chemicals and toxicants, you can arrange an eco consult with me, or opt for one of my Healthy Home Reviews. 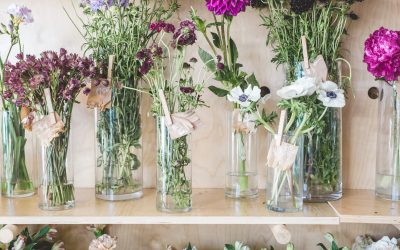